"It is not by chance that Gau Mata is a constant companion of Shri Krishna – the purnavatara. She is NOT his Vahana ; she represents a central aspect of the symbolism of Krishna. One cannot think of Krishna without the Cow"

Parampara’s cow products such as cow’s milk, ghee, panchagavya, gobar manure, gomium, gonyle (floor cleaner), go-ark, go-varati and vibhuti are from desi cows that are tended with reverence, care and love. The cows are allowed to graze freely at the Bharatiya Vedic Krishi Parampara. In this modern age, though there are a number of goshalas, in most of these goshalas, the cows are not allowed to graze but are tethered and fed in the shelter itself. Grazing cows are healthier than non-grazing cows, as they have access to nourishing herbs in the farm and they get to exercise their limbs. This makes their milk, manure and related products highly nutritious. 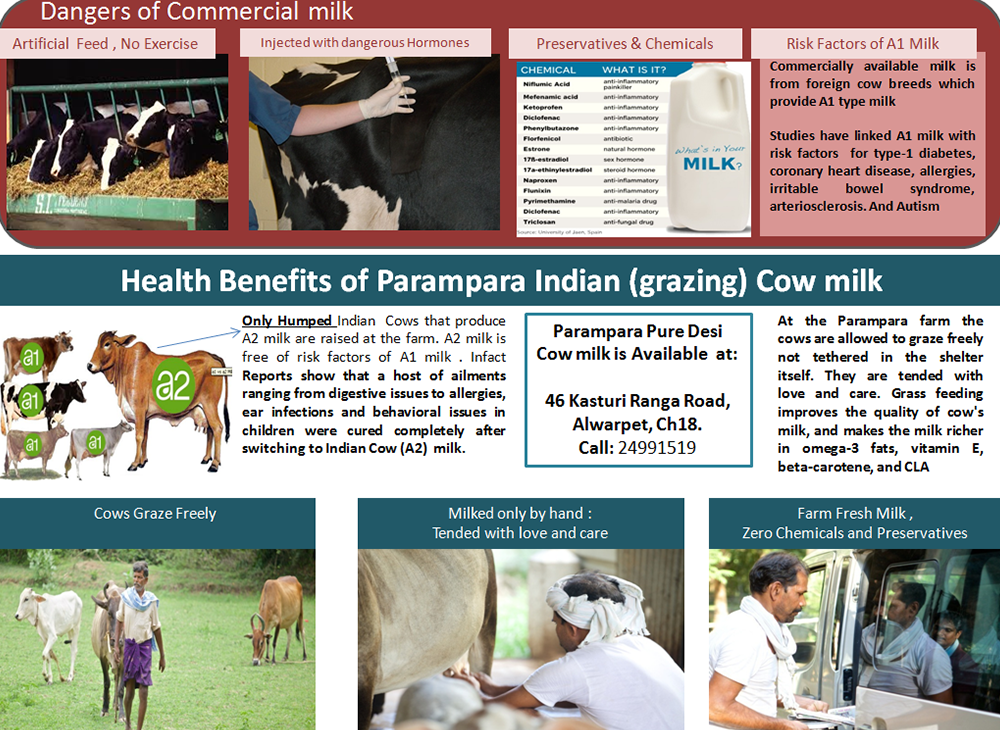 Parampara supplies 100% pure Desi cow milk from grass fed, grazing cows.
Cow milk is one of the best naturally available foods. It has all the essential amino acids and minerals necessary for good health; it is rich in calcium and vitamins A & B. Drinking cow’s milk also fills us with Sattva. The legend of Krishna the purna avatara is filled with Krishna’s love for cow milk and butter, indicating how beneficial they are to us.

Recent scientific substantiates the unique and superior nourishing qualities of Indian or Desi cow milk in comparison with other milk like foreign cow milk. Indian cows produce A2 milk, whereas foreign cows (with few exceptions like certain African breeds ) produce A1 milk. 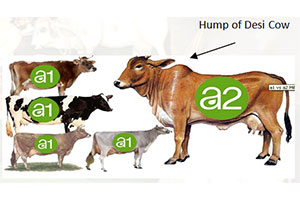 Study led by Dr Monica Sodhi of National Bureau of Animal Genetic Resources, and published in the Indian Journal of Endocrinology in 2012:

Findings show that incidence of type-1 diabetes and cardiovascular disease is low in populations with high consumption of the A2 variant of Beta Casein. Incidences of autism and schizophrenia, it says, have been shown to reduce with reduction in consumption of A1 Beta Casein.

Study led by Dr Andrew J Clarke, published in the International Journal of Food Sciences and Nutrition in 2014:

Findings show that aspects of digestive function like transit time and inflammatory status in mice were impacted by the protein type, with rats fed with A1 milk showing rise in problems like irritable bowel syndrome and constipation, with side effects like bloating and diarrhoea.

New Zealand happens to be world's largest dairy milk exporting country. 40% of NZ foreign trade depends on milk exports. Naturally the NZ Dairy Industry were very concerned about possible repercussions as loss of milk exports, due to medical experts advising people to stop consuming milk. Fonterra the largest Dairy interest in NZ initiated a research project, and were shocked to learn that their entire dairy milk supply was indeed a cause for concern.
It was found that a chemical substance designated as Beta Caso Morphine 7 (BCM7) separates out during digestion of dairy milk. BCM7 being a member of morphine family was found to be a very highly oxidizing agent, which caused brain damage in some children leading to Autism, and Diabetes 1 . In case of adults with leaky guts BCM7 from dairy milk has been associated with all the modern diseases such as Alzheimer, Cancer, Diabetes, Heart trouble etc.
More research established that BCM7 is found only in milk designated as A1 milk. A1 milk is produced by some cows of Bos taurus the European breeds or their cross bred cows. 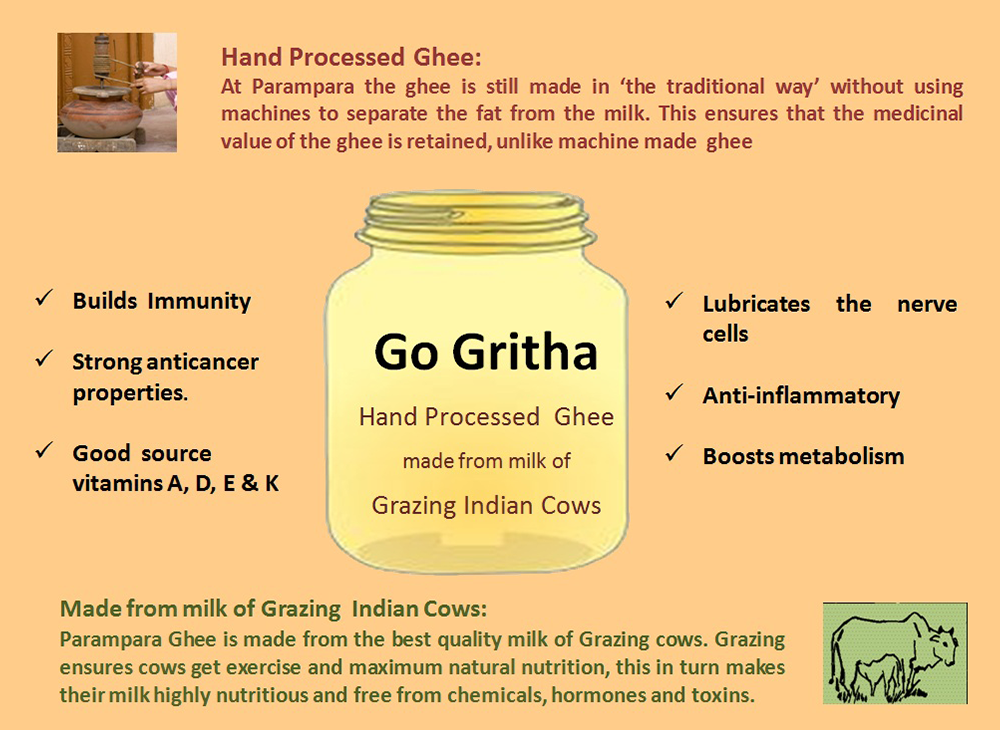 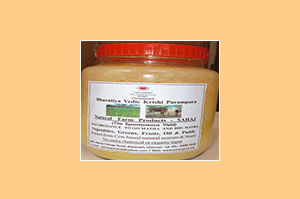 Made from desi (country) cow milk, this is the best quality of ghee one can get. In Parampara, the ghee is made in the traditional way without using machines to separate the fat from the milk. This Ghee has good smell, is golden yellow in colour; it is soft even after it becomes solid and liquefies at body temperature. Cow ghee is the basis of ayurvedic medicine, this ghee taken in specified quantity lubricates the nerve cells in the brain, thus keeping us mentally and physically fit. It has good cholesterol and has a tremendous ability to nourish the body.

Effect of Ghee on Intelligence

4 gms of Ghee (Ashtamangal Ghrit) was given every day for 4 months to the students. Academic performance and Intelligence test was performed. The result showed favorable effect on the intelligence of students.
(Source: http://www.ncbi.nlm.nih.gov/pubmed/15261966)

The Ayurvedic text Bhavprakash mentions that cow ghee is:

A 1985 EPA report concluded that the toxic chemicals in household cleaners are three times more likely to cause cancer than outdoor air pollution.

Also, a report by the Consumer Product Safety Commission on chemicals commonly found in homes identified 150 that have been linked to allergies, birth defects, cancer and psychological abnormalities. With windows sealed shut in the winter to conserve heat and save energy, and in the summer to hold in the cool air-conditioned air, these toxins build up to higher and higher levels.

Household cleaning products are among the most toxic substances we encounter daily.

In one study conducted over a 15-year period, women who cleaned their own homes had a 54% higher death rate from cancer than women who did not. The study concluded that the increased death rate was due to daily exposure to hazardous chemicals found in ordinary household products.

In addition to their inherent toxicity, these products also create tons of toxic waste which is disposed of in the environment in the form of air and water pollution and solid toxic waste.

What makes the Parampara Bio Floor Cleaner safe yet effective

The Parampara Bio Floor Cleaner is made using natural ingredients. It combines cow urine and pine oil in a scientific way to create an effective yet safe bio-cleaner.

Cow urine contains carbolic acid, which is a mixture of Phenol and Cresol, making it a valuable disinfectant and antiseptic . Pine oil too has natural disinfectant and germicidal properties. Besides, Parampara bio floor cleaner is sourced exclusively from country breed cows.
According to research many of the medicinal properties of Indian cow urine, could not be detected in urine of exotic, cross bred cows or other animals.

The Bio disinfectant is prepared by collecting early morning urine from country breed cows & this is distilled over a period of 8 hrs with the help of a distillation unit with temperatures going upto 200 degree centigrade. Again this cow urine distillate is mixed with pure pine oil at an rpm of 1500 .

(Note: Proceeds from the sale of cow urine cleaner help fund the upkeep of ageing cows and prevent their slaughter) 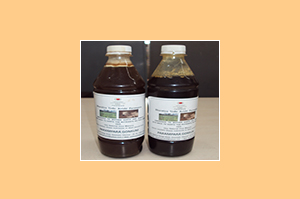 (Distilled Cow Urine for Human Consumption). Go Ark is a proven detoxifier and is rich in anti-oxidants. Go ark is known to reduce body fat and reverse certain cardiac and kidney problems. Its use as an anti-diabetic agent has been described in various Ayurvedic texts. The uniqueness of cow’s urine, as per ayurveda, is its ability to balance the tri-doshas (mucous, bile and air). Regular consumption of go ark also boosts the immune system.
Cow urine is medicinal and is a natural pesticide for crops. Cow urine contains copper, which is converted into gold inside the human body. It removes toxicity. According to Ayurveda, Cow urine balances the Tri-doshas – three faults in our body – Vaatha, Pitha and Kapha (Mucous, bile and gas).Cow Urine is a germ repellent. Hence cow urine and cow dung are used in India for daily and ceremonial activities.

“the cow urine has been given US patent for its bio-enhancer properties especially for early cure of tuberculosis and cancer in human beings. Other studies also revealed the immunomodulatory properties of indigenous cow urine. Interestingly, such properties could not be detected in urine of exotic, crossbreed cows or other animals.”
(source: The Indian Cow: The Scientific and Economic Journal Year : 2004, Volume : 1, Issue : 1)

“Cow urine has been found to enhance the effect of antibiotics. A composition by Indian scientists, using cow urine distillate to enhance the antimicrobial effect of the antibiotic present in the formulation, has been granted a US patent.
This could have a significant impact on drug usage. Use of the distillate could help reduce the dosage of antibiotics, drugs and anti-cancer agents while increasing the efficiency of absorption of antibiotics and other drugs.
Union HRD minister Murli Manohar Joshi, who announced the US patent at a function on Wednesday, said the patent demonstrated the use of cow urine distillate as an ''activity enhancer'' for anti-infective and anti-cancer agents. The patent, No. 6410059, was given on June 25.
This distillate has also been found to increase the activity of anti-cancer drugs such as taxol, which are extremely toxic. The dosage of these drugs too could eventually be reduced.
The pharmaceutical composition was a result of efforts of scientists of the Central Institute of Medicinal and Aromatic Plants (CIMAP), Lucknow and Go- Vigyan Anusandhan Kendra, Nagpur.
While detailing the patent, the scientists say that large portions of drugs administered are wasted as only a minuscule percentage is targeted at the infective microbes.
However, the unutilised drug remains as a load in the body and leads to emergence of drug resistance in parasites. Eventually, it leads to a failure of antibiotics against resistant infections.”
(Source: Times of India) 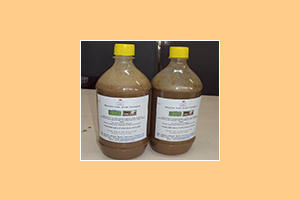 Panchagavyam is the fermented blend of five cow products - dung, urine, milk, curd and ghee. Panchagavyam is an excellent natural fertilizer for plants. It contains most of the macro and micro-nutrients and growth hormones required for plant growth. This is best manure for enhancing crop growth and yield. It strengthens the plant’s immune system, and hence protects against pest attack as well. Spraying of panchagavyam creates good conditions for proliferation of earthworms and other beneficial soil organisms. 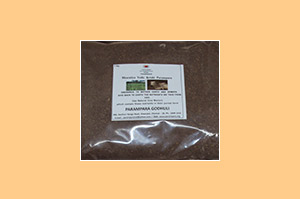 Powdered, pure manure made from cow dung. It is superior to chemical manures like Urea as it has good percentage of NPK. In addition, it detoxifies the soil from the effects of chemical fertilizers and synthetic pesticides. Gomaya helps produce the best quality grains, fruits, and vegetables when used as manure. It also provides Biogas, has anti – bacterial properties and is a proven radiation shield

“Indiscriminate fertilizer and pesticide usage, coupled with mono-cropping and non-application of base manure like cow dung and green manure (dead plants), has taken a severe toll on the organic content in soil and thereby soil fertility across the state” 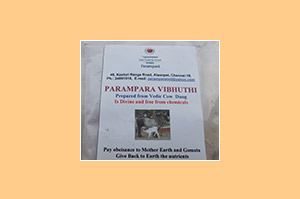 Associated with curative properties and is valued as an aid in increasing our receptivity to higher energies. Parampara Vibhuthi is prepared in the traditional way, which endows it with great efficacy. 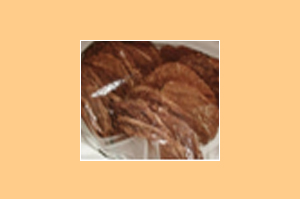 Dried cow dung cakes are an essential requirement for agnihotra. Efficacy of yagnas is possible only with genuine gomata varati. 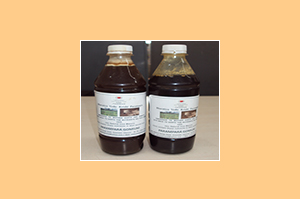 Pure, Filtered Cow Urine fortified with herbs. A product made from boiling herbal leaves with cow urine. It is used very effectively as bio pesticide.